Giving farmers the confidence to speak up for their industry

When trainee radio journalists are learning how to edit audio, a common exercise is to snip the ‘G’ off ‘God Save the Queen’, replace it with a ‘S’ and cut the ‘save’. You’ve now made someone say: ‘Sod the Queen’.

It demonstrates how easy it is to misrepresent someone and reminds us of our responsibility, and legal duty, to never alter the meaning of someone’s point. We can make them say it a bit faster without the ums and waffle, but, fundamentally, our job as journalists is to represent our interviewees fairly and truthfully.

This, along with many other insights from the world of journalism, were shared with a group of farmers at the most recent Just Farmers workshop in Bristol.

It’s the third media education workshop I’ve run since leaving the BBC nearly a year ago; when I realised someone had to do something about the chronic lack of trust between farmers and the mainstream media.

Just Farmers is a grant-funded project that aims to build confidence and communication skills among farmers and growers, while helping colleagues in the media find independent farmers who will talk to them. Even on a bad news day.

I seek out those who are passionate about what they do, who enjoy talking and listening and believe in the importance of engaging with the public; but perhaps nerves or fear have prevented them from doing so in the past.

There are 12 farmers in each group representing the diversity of modern British agriculture. Indoor and outdoor livestock systems, organic and conventional growers, large businesses and small family farms. For instance, in the newest group there’s a farmer who will soon be milking 2,000 cows indoors in a brand new ‘mega dairy’. There’s also an organic and biodynamic beef producer who hand-sows grass and clover seeds, leaving his cows to tread them into the soil as they mob-graze the pastures. I’m convinced it’s this inclusive diversity that gives every Just Farmers workshop a special kind of energy. The farmers share something fundamental in common – the production of food – yet they are different in so many ways. They learn together, and from each other. 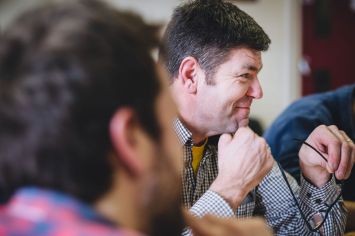 Warwickshire dairy farmer Charles Goadby, who was in the first group of Just Farmers, visits the workshop to share his experiences so far.

Warwickshire dairy farmer Charles Goadby, who was in the first group of Just Farmers, visits the workshop to share his experiences so far.

Each group completes two workshops – one in the city and one on a farm. I believe it’s important to start our journey in an unfamiliar, urban environment away from the sights, sounds and smells of the countryside. Just Farmers is about stepping out of your comfort zone and into something new.

We are joined by guest journalists who work in national and regional news, across print, radio and television. They lead practical interview exercises, answer questions and level with our farmers about the reality of working with the media.

The BBC’s Joanna Tidman gives feedback to the group. 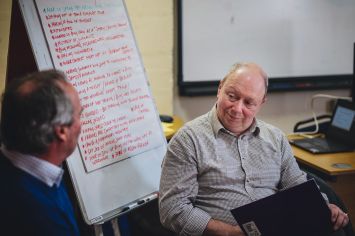 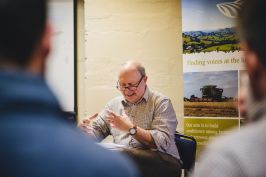 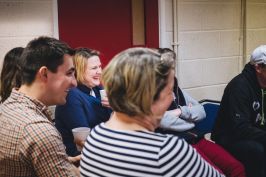 Just Farmers is not traditional media training. I call it media education. What’s the difference? Well, we don’t tell farmers what to say, or how to say it. We don’t tell them they can ‘manage the media’; we show them how to work with it. We don’t train them how to dodge questions; we put ourselves in the shoes of the person asking them. It’s more about thinking like a journalist – understanding what makes a story, how the news cycle works and where you fit into it. 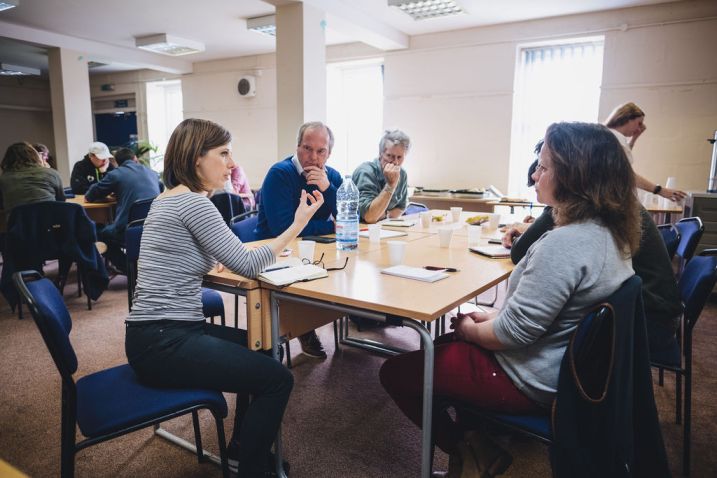 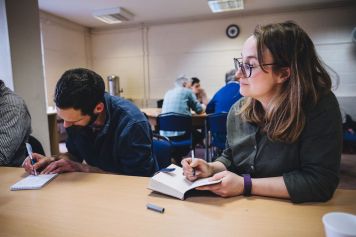 Cereal grower Richard Heady and beef and sheep farmer Rachael Madeley-Davies writing down story ideas related to their farms during the topline exercise.

In the evening, we eat at a vegan restaurant. Deliciously fragrant Indian street food made with chickpeas, lentils, fresh vegetables, herbs and spices. For at least half the group (some of whom eat meat seven days a week) it was their first ever vegan meal.

We do not dance around the elephant in the room. Our hosts share their passion for vegan food and their commitment to a vegan lifestyle, while the farmers feel comfortable enough to ask questions, debate a few issues and share their own stories. Ultimately it brings two very different worlds together, with a shared love of good food. There were 12 cleared plates to prove it. 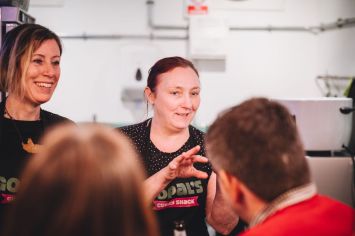 Vegan food is for farmers too – and it went down well

The question was: “Hands up who eats meat seven days a week?”

In early July, we will meet again for our second workshop on a farm in Staffordshire. This is where we put everything we’ve learnt into practice, replicating studio and pre-recorded interviews with professional cameras and microphones and challenging the farmers on controversial issues in food and farming. They’re not told what to say, but they are able to experience the sensation of staring down the barrel of a lens, of getting their message across before the clock runs out and staying calm under pressure. We explore social media, the mechanics of TV production and even learn how to shoot short films on a smartphone (including how to properly use a selfie stick!)

But is it working? Yes. Just Farmers is directly helping the media find open and communicative farmers who will talk to them. Many journalists and programme makers have found Just Farmers under their own steam, registered on the website and are now contacting our farmers directly. Sometimes they end up on air or in print; other times they just have a background research chat, which is equally valuable. It helps members of the media get an individual’s take on things, at a grassroots level.

I recently asked the first group what they took away from the experience. “Confidence,” they said. “We have more confidence.”

It felt amazing to hear that. And that’s what will drive me on to deliver the next workshop, and the next. Because everyone deserves to be confident in who they are and what they do.

I am now recruiting for our next round of workshops, starting in Bristol in late September. If you would benefit from being part of Just Farmers, you can apply here: https://www.justfarmers.org/for-farmers

I would really love to hear from you!

And if you’re still not convinced, here’s what the farmers had to say:

“What an amazing two days you orchestrated! Thank you so much. Such a great bunch of other farmers you assembled and a fabulous set of workshops and evening out that you set up. I don’t think anybody who participated would have been disappointed or thought their time might have been better spent doing anything else! Surely the best test of any event.” Ben Mead, Cornwall

“I have had a fascinating couple of days, met a really good bunch of people and learnt a lot about reporters and how they work. Thank you for seeing a job that needed doing and making it all happen.” Tim Dobson, Cheshire

“Thanks again for such a great couple of days. It really was worth the long journey. I thoroughly enjoyed it and had lots to think about on the journey home. Not least the wonderful group of farmers that I have got to know.” Sheena Horner, Dumfries and Galloway

“The ‘Thank you’ must go to you for getting such a fab group of people together. I thoroughly enjoyed the experience and can’t wait to see everyone again for round two!!” Sarah James, Llandrindod Wells