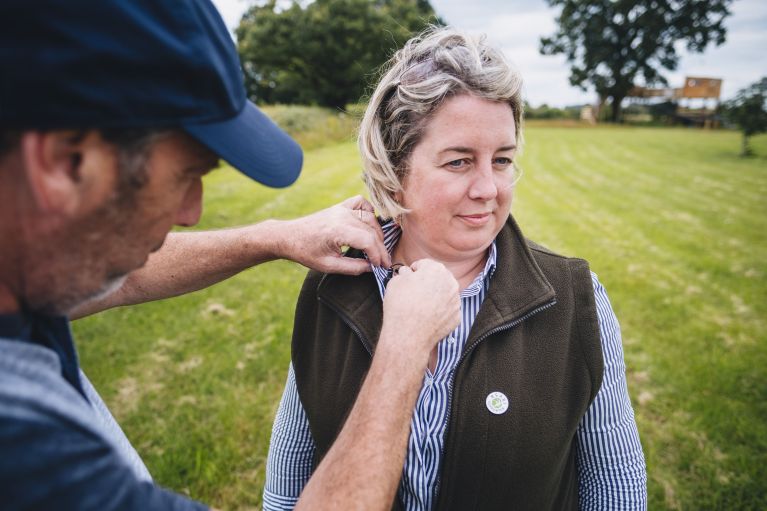 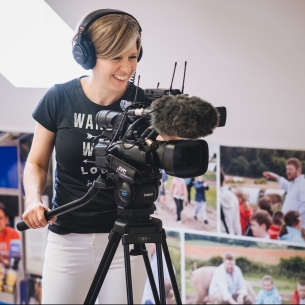 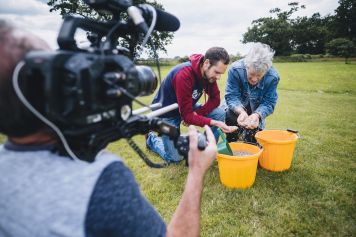 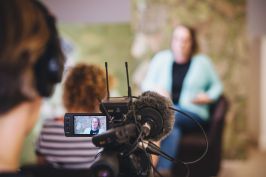 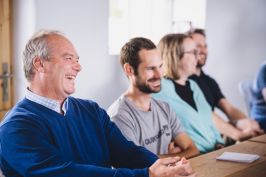 It’s almost a year since I ran the first ever Just Farmers workshop. A two-day media education course aimed at building confidence and communication skills among diverse farmers and growers from around the UK.

Earlier this year I had to give some serious thought as to how I was going to continue running Just Farmers. The workshops are fully-funded to ensure our training is open to everyone and no individual farmer is priced out – but good training doesn’t come cheap, and the grant I was awarded by the Frank Parkinson Agricultural Trust in April 2018 wasn’t going to last forever.

When you’re looking for answers, they often pop up in unexpected places. I happened to stroll into a lunchtime workshop held by the Prince’s Countryside Fund Farm Resilience Programme at the Oxford Farming Conference. There on the table was a leaflet about their grants, which support projects which provide a long-term positive impact to the individuals and rural communities they seek to benefit.

“Just Farmers is doing that!” I thought to myself.

I want to help farmers feel as comfortable talking to the media and urban audiences as they do in their own communities. I want to bring out the uniqueness of each farming business and inspire farmers to feel proud of their story, so they can tell it again and again. Surely that fits with what what the Prince’s Countryside Fund is trying to achieve?

It took me two solid weeks to write my funding application. Many late nights, lots of phone calls to friends with more business experience than me and even the farmers from my first workshop rallied round to help. They were so enthused after their experience they wanted other farmers to benefit too. Kate Daniels, now a smallholder but with a previous life in consultancy, had a few tips on writing funding bids. And Rob Mercer, a dear friend, fellow Nuffield Farming Scholar and a farmer who has seen the potential in Just Farmers from the very beginning agreed to be my referee. With this new team of friends and supporters, I finally – with my heart in my mouth – clicked the ‘submit’ button on my application.

It was a couple of months before I received the news that we had been successful. The Prince’s Countryside Fund has awarded Just Farmers £20,000 to fund eight workshops! I would like to take this opportunity to thank the Fund for choosing to support Just Farmers. I know how many worthy causes are out there and how much competition we faced. I’ll make sure every penny is well spent.

How the Money Will Be Spent

The grant will cover the training of 48 farmers over the next two years (there are 12 in each group). They’ll each attend two workshops and complete four days of training in a six month period.

I prefer to call it ‘media education’, and not media training. What’s the difference? Well, we don’t tell you what to say, or how to say it. We just give you the skills and confidence to be in control of your own story. We don’t manage the media; we work with it. We don’t dodge questions; we put ourselves in the shoes of the person asking them. In short, our courses train you to think like a journalist, not a PR professional. It’s more about storytelling than self-promotion.

We work with professional cameras and microphones and practice interview techniques  with guest journalists, programme makers and social media experts. Our farmers learn how to shoot short films and vlog on their smartphones – including tips on how to use a selfie stick properly! All these skills have wider benefits, helping farmers market their own businesses.

And Just Farmers is about listening as well as talking. We go out of our way to meet people who think differently about food and farming. We pack out a vegan restaurant in Bristol! 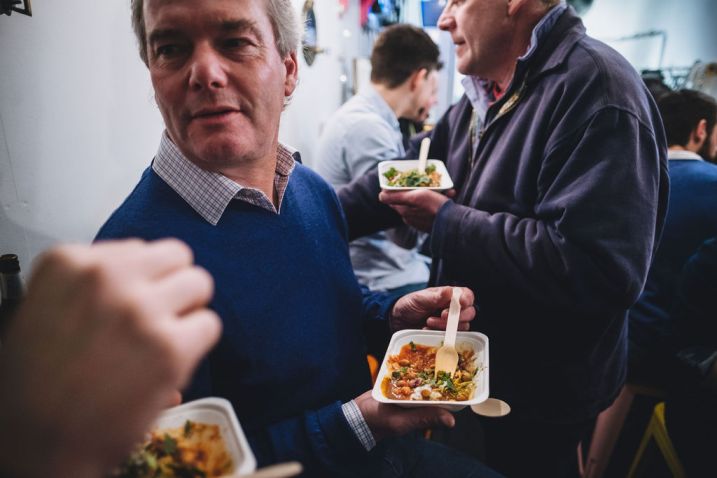 Vegan food is for farmers too – and it went down well 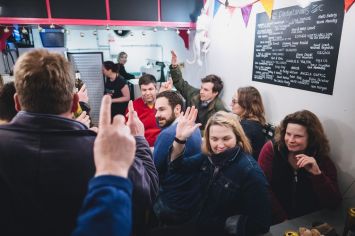 The question was: “Hands up who eats meat seven days a week?” 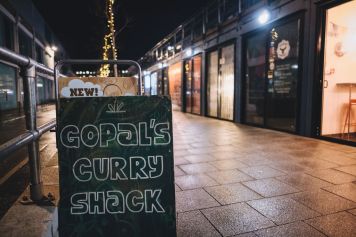 Just Farmers in the Media

Our other goal is to help busy journalists and programme makers find independent farmer case studies who will pick up the phone, answer their questions and have an open door policy to the media. They can do this by registering on our website and accessing our free online directory of farmers. And it’s working!

Dairy farmer Charles Goadby, once reluctant to speak out, is now writing a blog and was interviewed about calf hutches on BBC Radio 4’s Farming Today and You & Yours. Herdswoman Hannah Edwards was joined on a milking shift by gold medal-winning Paralympian Hannah Cockroft for BBC One’s Countryfile. Fresh produce grower Mark Bowyer featured in the Climate Coalition’s Recipe for Disaster report, sharing his experiences of the 2018 drought. Arable farmer George Young has his own YouTube channel and will soon appear on BBC Radio 4’s On Your Farm. Welsh beef producer Hefin Jones has been talking to BBC One’s Countryfile about his preparations for Brexit. Bedfordshire arable farmer Richard Heady has been nominated for the Digital Innovator of the Year in the British Farming Awards, and was joined in the cab of his combine during the oat harvest by BBC Farming Today.

More than 30 national journalists are registered on the Just Farmers website and are able to contact our farmers directly for interviews or background research chats. I’ll be working more proactively with the media in the coming weeks and months to grow this side of the project and build more relationships.

In Their Own Words

“For me personally the motivation to join Just Farmers was to be able to promote what I do as I’m sick of the negative propaganda that is seen so much online and in the media. I’ve wanted to do this for so long but had no idea how and where to do it, and had a fear of standing out and making a fool of myself.  To know that there are others with the same mindset was an instant confidence boost, and then to get together, share ideas and to be shown how the whole media machine works has given me the fuel to push in and do what I’ve always wanted to be able to do. I wish I knew all of this a few years ago before we closed our farm shop as the understanding I now have would have made a massive difference to that business.  By communicating more with the media, approaching them rather than waiting to be approached, we can get our story out there, dispelling the myths and fake news before it gets a head start.

We farmers have spent too long burying our heads in the sand and hoping nobody asks any questions.  I genuinely believe that this project has already shown it has the potential to be a real game changer in our industry, and I believe it will have a real snowball effect.”

“Anna Jones is a dynamo creating something out of nothing, something significant that has the potential to rebuild some of the broken bridges between the urban population and the farming community.  I have gained in skills and confidence in terms of communicating with print media, radio, television and social media. As well as this making me fit to be part of Just Farmers, it also equips me to take the marketing of my farm to the next level. I can’t thank Anna enough for the opportunity, and I am so glad that I am involved in this fantastic project.”

“These days farming is less of a way of life and more of a business. To survive in what is a very difficult arena we as farmers have to be able to communicate with the wider public. It’s engrained in us to want to continue farming and leave the land and the environment in better heart than what we started with. Just Farmer has helped me realise we have to get out there and communicate via the media and social media with our consumers. I’d recommend any farmer to apply for Just Farmers. I’d also suggest to any sponsor that they get massive bang for their buck!”

“It’s hard to appreciate just how badly the press behaved during BSE and FMD. Farmers were vilified for doing nothing wrong. Lives and businesses were ruined. For me it’s a long road back from those disasters but Just Farmers is a start. I am overwhelmed by the effort, enthusiasm, and commitment Anna Jones has brought to the project. Getting things off the ground from nothing is really difficult, but she seems to have cracked it. I am happy to be part of Just Farmers and I hope it goes from strength to strength. In the meantime our little farm is open to anyone at any time who wants to come and look around.”

“The knowledge that Anna’s workshops have imbued in me has given me tremendous confidence when dealing with the media, as well as building my own social media presence with the aim of educating the public about farming. Just Farmers is an invaluable too with a powerhouse like Anna at its stern and something I would love to see many other farmers get the opportunity to participate in and learn from.”

DOWNLOAD OUR QUESTIONNAIRE AND APPLY FOR A FULLY FUNDED PLACE HERE: