After coming under fire for selling toxic herbicide paraquat to the developing world, Syngenta was in Ivory Coast this month promoting its products and fighting a PR battle. I was there and Syngenta’s top boss in Africa agreed to talk to me.

In a packed out meeting room in Abidjan, crammed with concerned faces, scientists announced that Fall Armyworm, a voracious invasive pest, has been reported in 28 African countries, feasting on 80 different crops and slashing maize yields in particular by up to 60%.

CABI (Centre for Agriculture and Biosciences International) grimly confirmed the pest is now established in Africa, estimating it could cost maize producing countries $5.5bn a year.

The panel moved on to solutions, such as squashing the eggs and caterpillars by hand and increasing crop rotations.

A voice piped up at the back: “We have solutions! Yes, they are chemicals, but we have to come together, share our resources, put our prejudices behind and make sure we fix this problem.”

I watched to see how the room would respond to the man from Syngenta. Rather uncomfortably, he was barely acknowledged before the discussion moved swiftly on.

A South African journalist later said: “Why are they here with their billions of dollars? Chemicals are not the answer for Africa.”

The Swiss agrochemical giant is having a tricky time with trust. It’s something Dr Alexandra Brand, a German chemist and Syngenta’s Regional Director of Europe, Africa and the Middle East, is keen to tackle. For starters, she believes blame lies at the company’s own door.

“How open have we been in Europe for a true dialogue?” she asked, “Have we been rather defensive when we are attacked? We’ve said, ‘We have the science, we know the truth. You don’t know the truth, you can’t be taken seriously.”

And failing to take their critics seriously has cost Syngenta dearly. Dr Brand readily admits it has suffered at the hands of its own arrogance.

“Absolutely, yes!” she said. “This is something we need to change. I am not looking for being loved by society but to be accepted as a responsible partner on what the world needs – this is all I am aiming for.”

Syngenta was killing two birds with one stone at the Africa Green Revolution Forum (AGRF) in West Africa, simultaneously trying to improve its image while tapping into an emerging market. They’re investing $1 billion over 10 years to move thousands of smallholders from subsistence into commercial agriculture.

And they’re keen to demonstrate results. Koffi Kouamenan Honore, a cocoa producer from Côte d’Ivoire, shared with delegates how he almost abandoned his 5 hectare farm before joining Syngenta’s ‘Good Growth Plan’. Using a combination of improved seeds, herbicides and insecticides, his yield increased from 250kg to 1 tonne per hectare allowing him to build a new house and purchase a car. 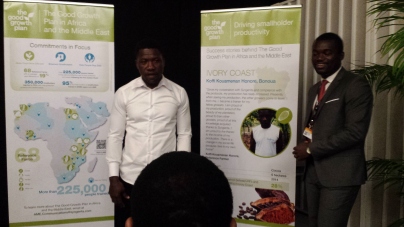 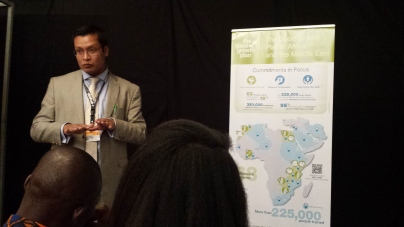 But Syngenta’s motives for working with farmers like Koffi are viewed by many with suspicion, particularly in light of revelations about paraquat, an effective but highly toxic herbicide. Though banned in Europe, it is still manufactured in the UK and sold around the world, including to some of the poorest countries. It doesn’t sell a lot of paraquat in Africa: “It’s around our number 20th selling product,” a senior figure at Syngenta told me.

Dr Brand was firm in her response:

She added: “Our products are chemicals and they can cause damage to plants and humans when used wrongly so we are out there training smallholders how to use our products safely.”

Syngenta has indeed trained 225,000 people in the safe handling of its products, but there are 41 million smallholders across Africa. Ensuring absolute safety is impossible. It’s inescapable that people have committed suicide by drinking paraquat, or died from accidentally ingesting it. But Dr Brand remained steadfast, pointing out that paraquat is an affordable “entry level” herbicide for some of the world’s poorest farmers.

“It would be very easy for me to stand on the moral high ground and say there is a risk so you must not use it,” she said, “but with that I would prevent African farmers from using a very important tool which will help improve their livelihood.”

Syngenta is determined to make a return on their billion dollar investment. Whether that’s in the interests of smallholders, shareholders or both – they’re in Africa to stay.

“We can grow Africa,” was the commitment from Dr Brand. “I truly believe this is possible.”