Restore Your Faith in the Media! Go To Kenya

In September I travelled around Kenya. This time I had a companion in the form of my boyfriend, Alex, and it was brilliant to share the Nuffield experience with him.

I wanted to look at the media’s coverage of farming in a country economically dependent on agriculture and where the vast majority of the population live in rural areas. Three quarters of the Kenyan population make some part of their living from farming.

I suspected it might be a very different story to what I’ve found in the urbanised West, where farmers feel in the minority and often complain of being drowned out by this urban/rural ‘disconnect’.

As it turned out, I got some first-hand experience of Kenya’s farming coverage when the Daily Nation newspaper asked me to write an article for its Seeds of Gold farming supplement.

It’s about a dairy farmer selling unpasteurised milk directly to consumers on the edge of Nairobi. He milks his seven cows in a zero-grazed system in the city’s suburbs. You can read the piece here.

The Daily Nation was established around the time of independence in Kenya. Historically it was seen as a nationalist newspaper while its rival The East African Standard served the colonial establishment.

Today the Daily Nation is the biggest newspaper in east and central Africa, selling between 180,000 and 250,000 copies a day. Consider The Guardian’s circulation is around 164,000.

John Kamau is an award-winning investigative journalist. In his 20 year career he had never written about agriculture until he investigated corruption and mismanagement within the coffee and sugar cane industries. His scoop dominated the front page for days. It went huge.

“This is the bedrock of the Kenyan economy,” he said. “It’s the only thing that can turn around this country’s economy and lift people out of poverty. Coffee can bring a lot of income into this country. We have some of the best coffee in the world, but when you look at the coffee farmers they are some of the poorest. Why is it that the coffee they grow is sold at a premium price, yet they don’t have any money?”

John only recognised the economic potential of Kenyan agriculture when he started looking into it. Suddenly a whole new target audience opened up. “If you empower the people who farm, they will buy the newspaper,” he said. 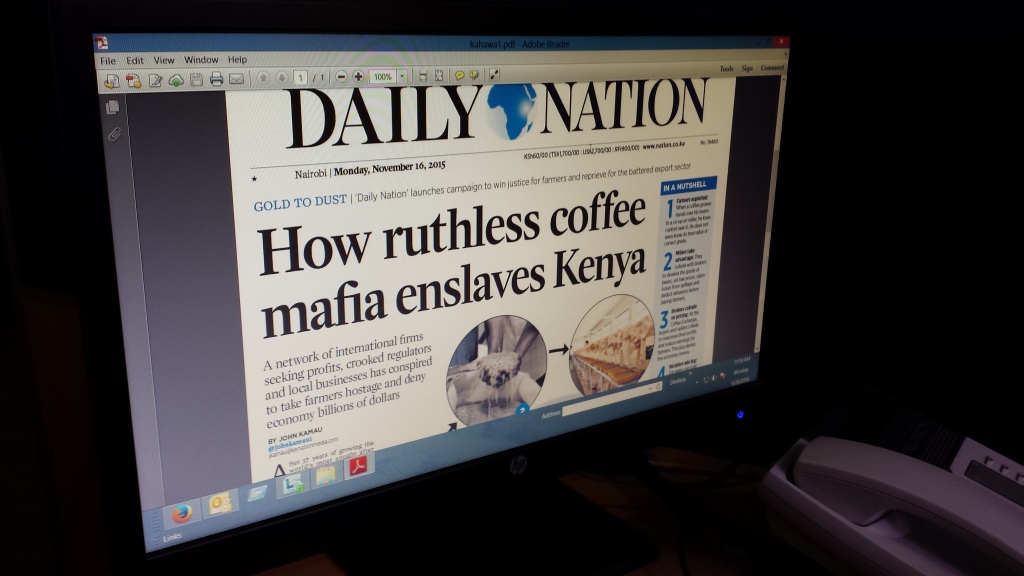 But where Kenya is doing remarkable work is on the educational side. In the lack of organised union representation or effective Government extension services, the media has taken on the job. Trusted farming advice can be found in newspapers, magazines and online, and all over the radio and television.

Two-and-a-half years ago the Daily Nation launched its Seeds of Gold farming supplement. The newspaper’s top brass identified a gap in the market for agricultural information. It’s no secret that Kenyan farmers are poorly represented and the industry is hampered by corruption, throughout the supply chain and at a Government level. Primary producers, particularly smallholders, get a rough deal economically and politically.

It turned out to be a winning formula. Seeds of Gold is published in the Saturday edition of the Daily Nation and initially increased circulation by 3,000 copies. That has since levelled out to between 2000 and 2500 extra copies, every Saturday since the supplement was launched. It even has a spin-off TV show on the national broadcaster NTV (also owned by the Nation Group).

There is a thirst for knowledge about farming in Kenya. I am still receiving emails from people who read my article and want more information about Stanley and his dairy cows. How can I do the same? Where does he buy his feed? Can you give me more details about cost of production? Why does herd yield fluctuate so much? I have a business plan – could you look at it please?

Never, in more than a decade of covering rural affairs for the BBC, have I received such a positive, enthusiastic, inquiring response to a story. Dozens of emails and they’re still coming.

I have covered some controversial topics in my time so I’m used to responding to complaints and criticism, and many, many passionate opinions. But being asked to look at business plans? Being thanked for inspiring a young farmer who wants to bring food security to her drought-prone region? This was truly humbling.

Obviously I pointed them all in the direction  of the real experts!

This educational, practical approach in the media’s coverage of farming was echoed on Kenyan radio and television.

Kenya’s national broadcaster KBC has a dedicated farming programme called Mali Shambani (Swahili meaning ‘wealth in the farm’). It’s produced by Geoffrey Onditi, a farmer himself, who kindly showed me around the studios in central Nairobi. It’s Kenya’s equivalent to Farming Today except Geoffrey enjoys a primetime, hour-long slot on Monday evenings. It gives you an idea of how differently farming is viewed by the schedulers in Africa!

As TV directors, Alex and I were thrilled to join Kenya’s most famous farming show on a shoot. It’s called Shamba Shape Up – a weekly programme broadcast nationally in English and Swahili. It’s fantastically successful and pulls huge audiences, reaching around nine million viewers.

I describe it as a cross between Countryfile and DIY SOS. Every week the Shamba Shape Up team visit a different farm, or ‘shamba’, and give it a makeover to help the family earn more from their land.

We visited a nine acre holding in Kajiado County near the town of Kiserian. The farmers, husband and wife team Joseph and Esther, keep a flock of sheep, two dairy cows and grow maize, mango, papaya, banana, oranges and kale.

In a single episode of Shamba Shape Up the team showed Joseph and Esther how to use the correct fertiliser for their banana crop and introduced them to a milk truck with a stainless steel tank (a mini tanker if you like). Their milk is currently put into a small churn and collected at the farm gate by the local processor, meaning they’re beholden to one buyer – and one price. The truck would allow them to form a cooperative with their neighbours and transport milk further afield, giving them more control over their market. 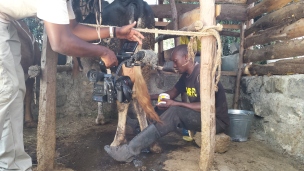 Joseph preparing to hand milk one of his cows 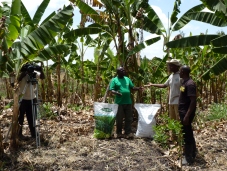 Introducing Joseph to fertiliser for his banana crop, with presenter Tony Njuguna 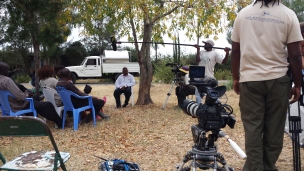 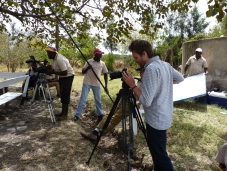 My Alex helps out with filming – so much for his holiday!

The makeover even stretched to the kitchen. Esther usually cooks the family meals over an open fire, in a little corrugated iron hut. It was unbelievably smokey and the film crew had trouble filming the sequence without coughing and rubbing their eyes. As part of the programme, Shamba Shape Up replaced the open fire with a small wood-burning stove. An incredibly simple device, like a camping stove really, which cut down on the smoke and made an immediate difference to Esther’s life. 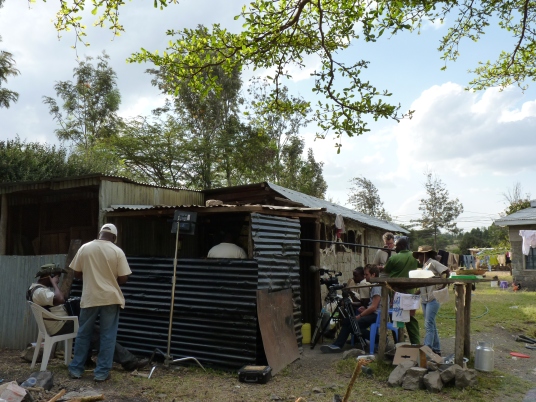 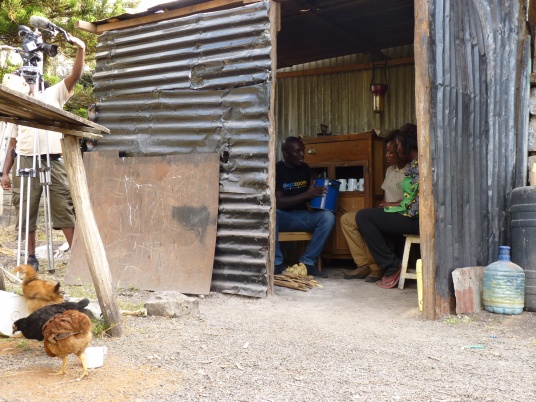 Shamba Shape Up is produced by an organisation called Mediae which uses media as a development tool, to improve lives in Africa. That makes it sound a bit worthy – like an Oxfam advert – but it doesn’t feel like that at all. Their brands like Shamba Shape Up and a soap opera called Makatano Junction are extremely ‘watchable’. High production values, high profile presenters and – most importantly – big ratings. Audiences don’t feel preached at, they feel entertained and empowered. And it works. Some research carried out by Reading University found that more Kenyan farmers are employing new farm practices to improve productivity, particularly in maize and dairy, as a direct result of watching Shamba Shape Up.

We spent three days with a TV crew that produce one of Kenya’s most watched and best loved programmes, with all the same logistical and editorial pressures that Alex and I face on Countryfile. By the time the director called a wrap, we could see the difference Shamba Shape Up had made to that family’s life. They had made a TV programme and improved a farm at the same time!

I couldn’t help but wonder how much of a difference my own television career has made, in our Western culture of chasing ratings, seeking exclusives and promoting our own brand. I guess my contribution has been more subtle – bringing the stories of the countryside into peoples’ homes, highlighting issues that affect our rural areas.

Still, knowing a mother can cook for her family without coughing or wiping her streaming eyes – and all because of a telly programme – that’s a reminder of what my profession can do. 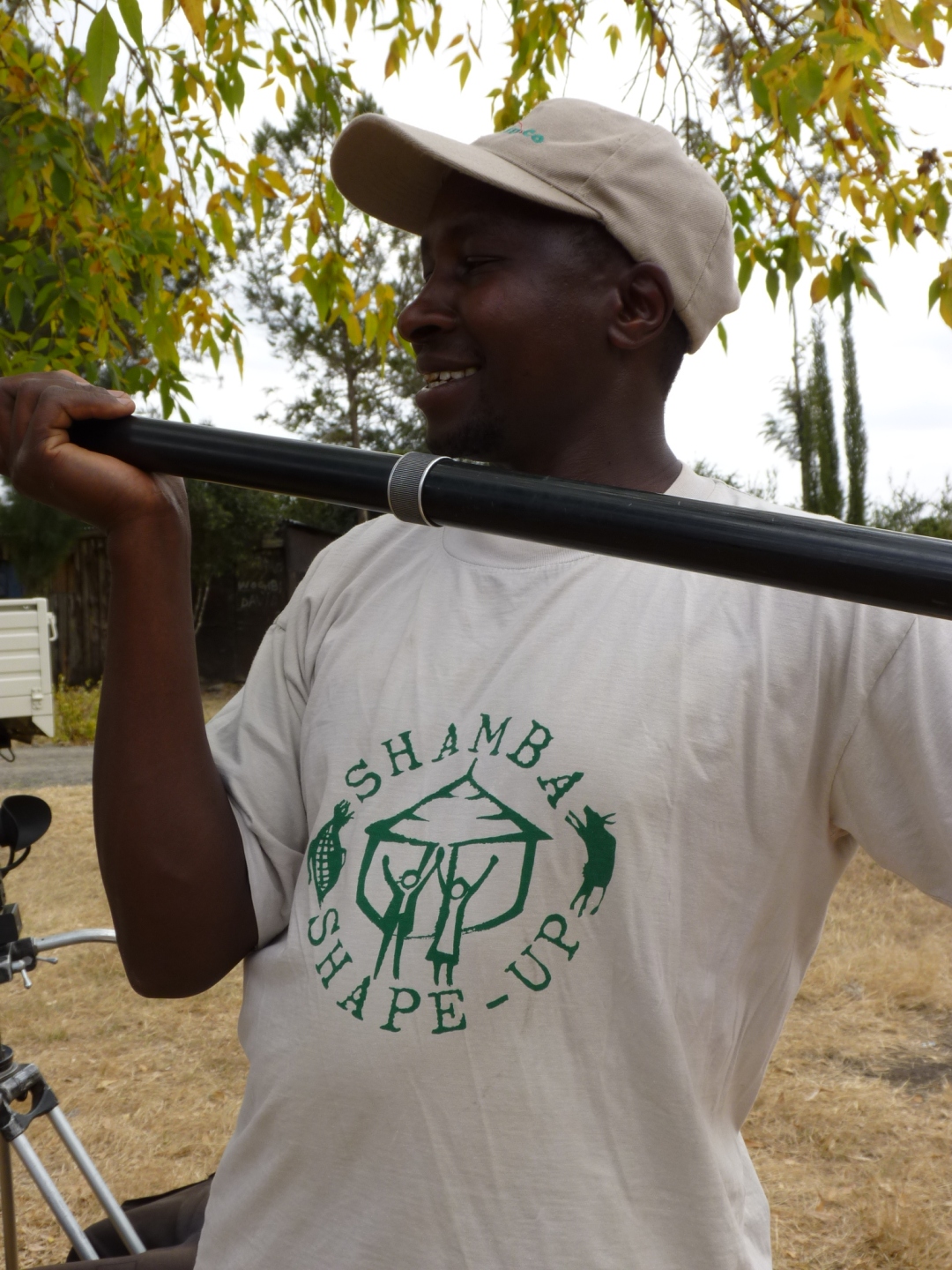 A heartfelt thank you to all our new friends in Kenya who made our visit so memorable, worthwhile and valuable.