The Lady Who Lives in a Bank

There’s a place called Kellogg just off Route 80 in Iowa.

I was heading west towards Des Moines when I spotted the sign and, assuming it was the birthplace of Mr Kellogg of Cornflake fame, I took a de-tour to check it out. Trust me, it was the most interesting thing on the Interstate that day. There ain’t a great deal to look at, aside from truck stops and an endless sea of soybean and corn (so it would make sense if the daddy of breakfast cereals was a local boy).

As I pulled off the Interstate I picked up another sign for the ‘Kellogg Museum’. It conjured images of an air-conditioned visitors’ centre with interactive displays tracing the history of Cornflakes.

Two miles later, I roll into what appears to be a deserted Midwest ghost town; I’m a lone stranger in a rented Toyota Corolla.

I parked up next to the bank and looked around for the museum. It was closed. 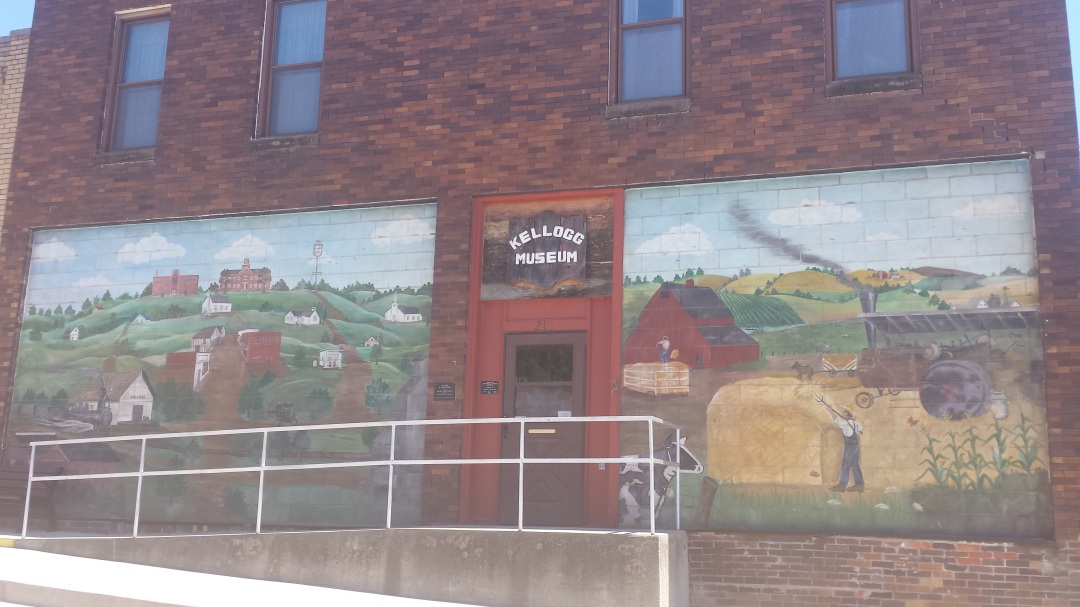 Thinking I should at least take a couple of photos before jumping back in the car, I wandered across the street and took in the old Kellogg Bank. It reminded me of those you see in Westerns; a no frills building with the word ‘BANK’ in big black letters. No need for any more detail because it’s the only one in town.

“Hey there,” said an elderly white-haired woman in sunglasses, suddenly appearing around the corner. “Can I help you?”

I explained I had stopped off to explore the home of Kellogg’s cereal.

The woman explained that this town had been settled in 1865, built on money from farming and the railroad which runs straight through the middle of town, transporting grain out to barges on the Mississippi River.

“How many people live here?” I wondered.
“700 and shrinking,” she replied matter-of-factly.

Until about 10 years ago, most of the residents were employed by a large washing machine factory. It closed down and the town has been in steady decline ever since. The lady set up the museum herself in an attempt to attract tourists but local services, like the bank, are gradually disappearing.

“I live in the bank now,” she said, out of the blue. “The bank is my house. Would you like to see inside?”

It was such a random invitation I couldn’t think of a reason to say no, even if I was a little uncomfortable about entering a redundant building in an eerily quiet town. She swung open the door and the first thing I saw was a rocking chair next to an ATM machine. Through another door and into the living room, where people once queued to pay in cheques. The cashiers’ counter is now covered with all manner of homely trinkets; a little table, which probably displayed leaflets and paying in slips, decorated with family photos and ornaments. The room was incredibly cosy but also, undeniably, a bank.

The lady led me into a sunny bedroom; from the window I could see the railroad and giant grain silos. “This is where my husband and I sleep – it used to be the manager’s office.”

Behind the counter, wide open and full of clothes and shoeboxes, was the vault. What once protected tens of thousands of dollars is now a walk-in closet. One of the lady’s best outfits hung on a steel door several inches thick. Around the corner was a small dining table, next to another industrial safe.

“When the bank closed they asked if my son was interested in buying it,” she said. “He’s an engineer for a railroad company.”
“Have you lived here all your life?”
“Oh no, I was born about seven miles away – in Rushville. It was an old stage coach stop.”

Her great-grandfather had travelled to Rushville on horseback from one of the eastern states during the American Civil War. His wife had died so he moved his mother-in-law and three young children westwards where he had family who could help care for them.

“I was born there in 1942,” said the lady.
“Do you ever go back?”
“Oh yes, I was there only last week tending the graves of our family. There’s only the cemetery left now.”
“But what happened to all the buildings?”
“Well, they just crumble away don’t they? That’s history I guess. It’s only in my memories now.”

There was a slight wobble in her voice, and I was surprised to feel a lump in my throat too. I felt sad to see this stoic old lady, who had already lost one home, watching another town slowly deteriorating.

After the tour, she led me out on to the street. “If you’re passing by tomorrow the museum will be open then,” she said hopefully.
“Maybe I will,” I smiled.
We both knew I’d be unlikely to ever visit Kellogg again.

As we walked down the street (and I promise this really happened) the old lady stooped to pick up a penny. “For good luck,” she said, handing it to me.
I thanked her and walked over to my car. 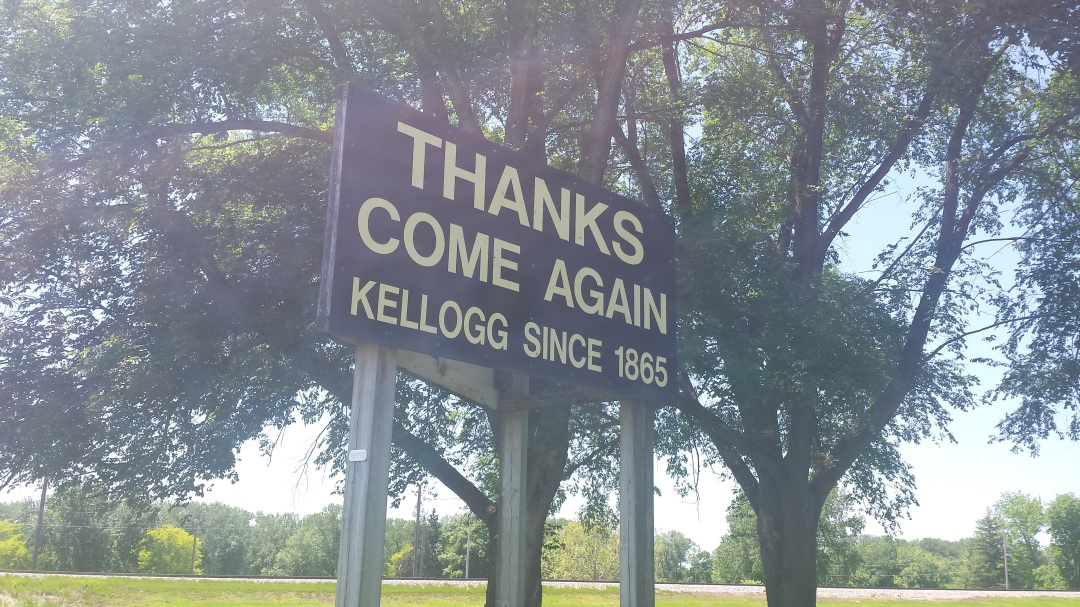 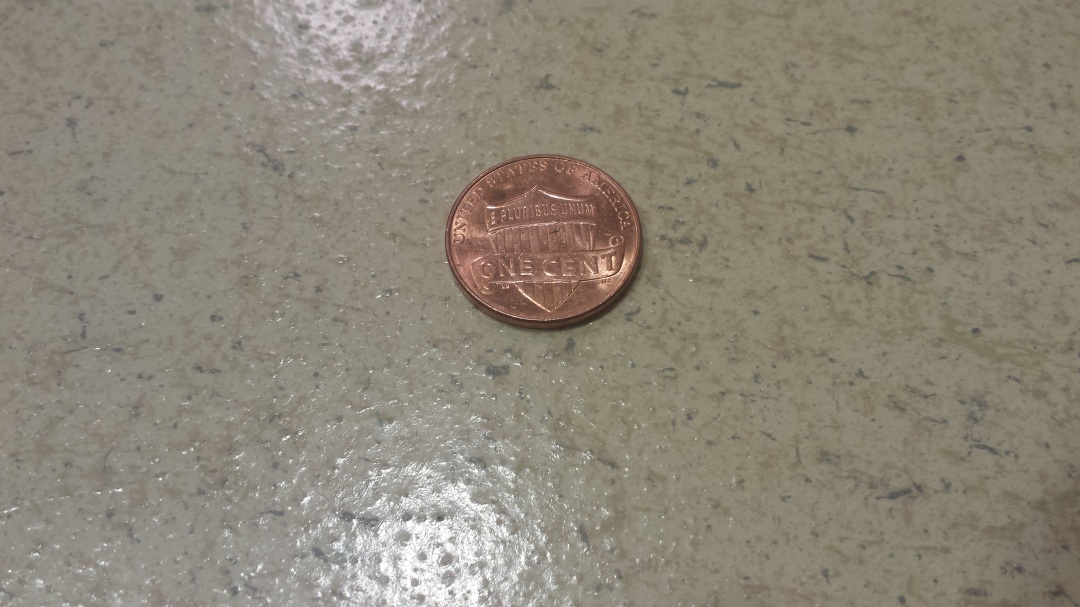