To say the last week has been an education would be a massive understatement. On Wednesday, March 2nd I was reunited with the UK 2016 Nuffield Scholars at the Farmers’ Club in Whitehall for three days of presentations and discussions. The aim was to give us a general overview of UK agriculture and to introduce us to conference life.

It would be too time-consuming for me and too boring for you to write up everything I heard down in London Town (and to be honest, some of it could not be repeated). I thought it best to list my three favourite speakers and the key points which really resonated with me.

Our programme kicked off with Professor David Hughes, Emeritus Professor of Food Marketing at Imperial College London. He was billed on our programme as an ‘International Speaker on Global Food and Drink Industry Issues’.

Talk about coming out all guns blazing! This guy holds an audience in the palm of his hand and could convince you of anything. I was so enraptured my note taking was pretty shocking – I suspect I may have just stared at him with my mouth slightly open. It was one of the most engaging presentations I’ve ever seen.

The overall point was to give us a global perspective of food industry developments – population changes, emerging markets (and disappearing ones), opportunities for agriculture (and challenges). If you get a chance to hear Professor David Hughes speak just jump at the chance. The bullet points below have passed my ‘You’ll Never Guess What’ test (i.e. I’ll probably wheel them out over a pint of Doom Bar and a pork scratching with my mates down the pub).

* The population of Africa will double by 2050. DOUBLE. Asia’s will increase by a further billion. Europe’s will stay pretty much the same, or could even fall in some countries.

* In London 45% of households are one person.

* If you’re a farmer trying to market a product direct to the consumer, you need to consider your choice of words. Nouns are for the commodity producers. One of David’s slides said: “How do you like your meat? With adjectives please!”

He gently poked fun at the stoic beef farmer who, when asked what he produces replies with a grunt akin to his prize bull: “Beef.”

“Beef”, according to Professor Hughes, is not enough. The consumer wants adjectives – local, grass-reared, pasture-fed, prime, juicy, rich, happy, free-range, organic….it goes on and on.

* What’s playing a big role in bolstering demand in Europe? Coffee! My Dad may moan about the price of a Starbucks latte but the truth is demand for posh coffee is creating a much-needed market for liquid milk.

Allan Wilkinson, Head of Food and Agriculture at HSBC

Some tough love dished out in this presentation and Allan is not a man to pull his punches. He wants to do business with only the best and most profitable and improving farmers and makes no bones about that fact. 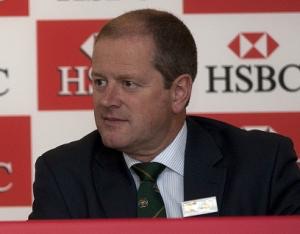 One thing I’ve always assumed about the banking world’s relationship with agriculture is that farmers are a safe bet for lending, simply because their land is a solid asset to borrow against. That isn’t enough for Allan – he wants to see costs of production and proper management. For him (and therefore HSBC) it’s not about land value but how much cash flows in a farm business. He drove the message home urging that business performance must be 10/10 and average just isn’t good enough.

He believes working with businesses to make the changes needed to be better equipped for the future is crucial. Apparently the difference between the best and worst farms has never been bigger (note – he didn’t say the biggest and the smallest. Success isn’t about size).

For someone outside the world of business who never thinks about things like margins and costs, Allan’s speech made sense. I got it. And it’s the first time I’ve listened to a banker for that long and stayed awake.

But there is always another viewpoint. I had an interesting chat with a fellow scholar on the flight from London to Dublin for the Contemporary Scholars Conference in Cavan (happening right now. Twitter: #NuffieldCSC)

It made me question how we view success in farming. Is it all about profit margins? What if a farmer owns their buildings and land outright and has never borrowed a dime from the bank? They break even and, subsidised by the Single Farm Payment, plod along happily. They may not have a successor and would rather tick along until retirement than seek opportunities for expansion, thank you very much. Do these factors make a farm a failing business?

When I suggested to one Scholar that “profit isn’t everything” he nearly choked on his coffee and, when you think about it, what other industry could get away with such a thought? Other Scholars feel the subsidy system is propping up inefficient businesses and preventing young, fresh blood full of bright ideas from entering the industry. I can see their point too.

But I had to put it out there that British farmers aren’t just producing a product for the market – they are custodians of the landscape, they manage it for wildlife and recreation as well as for food production and preserve the cultural, historic and social capital in our countryside; for the entire nation and future generations. You can’t put a market price on those things.

* The two biggest causes of price volatility are climate and politics.
* The whole food industry is the biggest employer in the UK manufacturing sector.
* 97% of the world’s fresh water is in the ice caps. We live on just 3%. South East Asia has an estimated 60% of the global population but only an estimated 30% of its freshwater resources. By contrast, Brazil has 3-4% of the world’s population but 16% of the freshwater. Asia can’t produce enough food now – let alone in 30 odd years when the population tops five billion. What does that mean for trade? And what happens if you can’t keep people fed? Big opportunities for enhanced trade, more food will be traded internationally going forward. And the potential to get this wrong….
* Demand for milk is declining in Europe and North America, but rising in India, China and Africa.
* Excluding pigs and poultry, the majority of UK farmers still do not know their own cost of production.

As a Nuffield Scholar, you are expected – and required – to do a lot of public speaking. Many of you may think I wouldn’t have a problem with that, but the truth is my heart goes like the clappers every time I ask a question in the conference hall. My knees tremble as I rise to my feet and my clammy hands almost always leave sweat marks on the microphone.

And I consider myself an extrovert!

Ges is a former City banker who found his second calling as a public speaking coach. He was running the first workshop on Friday morning – faced with 18 scholars barely through their first coffee of the day. It’s not the ideal time for public speaking.

You can tell Ges is an orator before he even opens his mouth. He strode up to the front of the room and, after a pregnant pause, asked: “Why do we do it? Why. Do. We. Do. It?”

A rhetorical question of course because he’s about to tell us, but it certainly got our attention. Humans have been communicating through speech for 10,000 years. The written word came way, way after. Speech is our primary tool and, if you know how to use it, a powerful one too.

Ges referred to a famous survey which questioned people about the things that terrify them most. The results were:

People would rather DIE than talk in public!

So just to run you through Ges’ top tips:
Envisage winning and success before going ‘on stage’
Breathe
Stand with authority – don’t fidget or contort yourself into strange shapes
Be natural with your hands and if you can’t be natural, then put them by your sides
Have eye contact with the audience
Smile
Don’t be afraid to wield the power of the pause. A moment of silence has great impact
Move around the stage

But the best thing I have to share with you is Ges’ tip for warming up the voice – British swear words. But not what you’d hear down the local on a Saturday night – Shakespearen curses. We proceeded to hurl insults at each other like “you frothy, flap-mouthed canker blossom!” And it felt great. I definitely recommend a good Tudor profanity.

Other highlights of the London pre-CSC included a tour around the House of Lords with Baroness Byford and a visit from HRH the Duke of Gloucester who spoke to us all individually about our study topics. He asked me if Countryfile is guilty of “making farming just look like good fun” and avoiding the harsher realities of the industry. I was quick to point out that we dedicate a section of the programme to the grittier issues every week and in the last 12 months I’ve directed films about campylobacter in broiler flocks, herbicide resistant black grass and affordable rural housing. He was very interested in the latter and shared some of his own thoughts on addressing the housing shortage.

We had a lively discussion on Brexit with Maeve Whyte, Director of the NFU Brussels office, Neil Parish MP for Tiverton and Honiton and chair of the Parliamentary Select Committee on the Environment, Food and Rural Affairs, and Allan Buckwell, Senior Research Fellow at IEEP and a member of the Nuffield selection committee which interviewed me on that terrifying day in October. He also knows, and even better, understands everything to do with the Common Agricultural Policy. In my mind, Alan has assumed superhero status as ‘CAP Man’. They were all backing the Remain campaign – the UK Scholars were a little more divided.

We heard from Sir Peter Kendall, chair of the AHDB, had an introduction to PR and media communications with Louise Rose and Laura Bailey from Savills Public Relations team. Patrick Begg, Rural Enterprise Director at the National Trust shared their 21st Century ambition for 200,000 hectares of farmland; all  aimed at “growing the nation’s love of special places”.

I’m now on the other side of the Irish Sea in Cavan for the Contempory Scholars Conference 2016. 77 international Scholars from 14 countries. It’s in full swing. So much so I haven’t got time to blog about it – but here’s a glimpse of what it’s like. And the Irish hospitality is second to none!